We Tested 9 Offset Turners—These Are Our Favorites

For a sturdy, nimble offset turner that flips, lifts, and scrapes with control and precision, we recommend the MANNKITCHEN Professional Grade Stainless Steel Spatula. If you’re in the market for a larger turner for more heavy-duty tasks, the Dexter Russell Offset Hamburger Turner is also a great choice.

A good offset turner is a tool that you’ll find yourself reaching for again and again. While you might associate them with a short order cook using one to flip plate-size hash browns, they also come in more compact sizes for the home cook—and they're mighty useful. They can transfer cookies to a cooling rack, serve up clean slices of casseroles, flip pancakes, smash burgers, and more.

So what exactly is an offset turner? It’s a spatula, usually made of metal, with the express purpose of turning food while cooking, such as burgers or pancakes. Almost all of them have two bends in them (i.e. the offset part): one bend down where the handle meets the blade, and another one where the blade flattens out to create a level surface.

We put a variety of metal offset turners—big and small, squared-off and rounded, long and short—to the test, sussing out which ones flipped, scraped, smashed, and served with ease.

The Winners, at a Glance 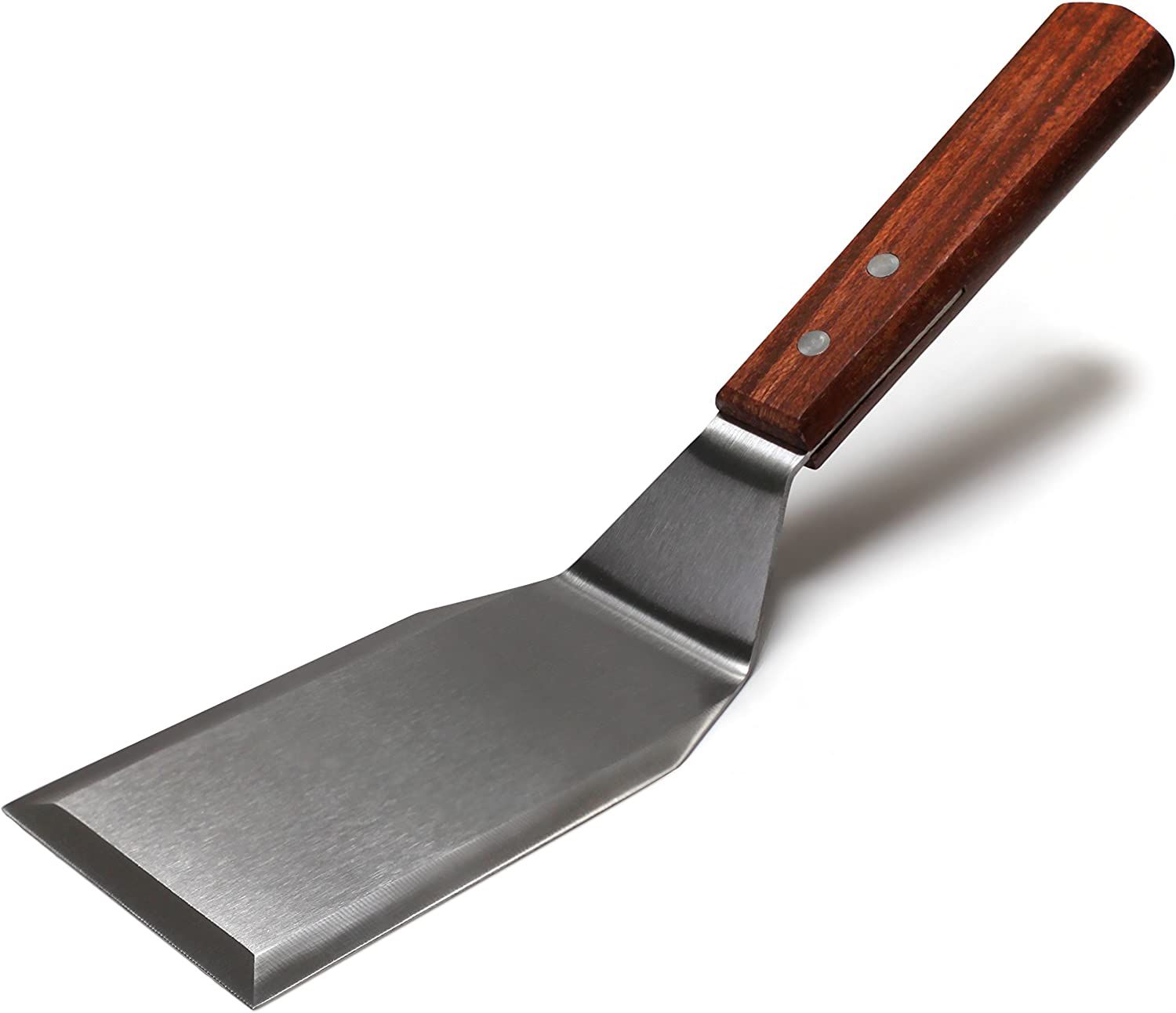 This model was the only one to ace all three of our tests, easily flipping pancakes, smushing smash burgers, and serving lasagna. 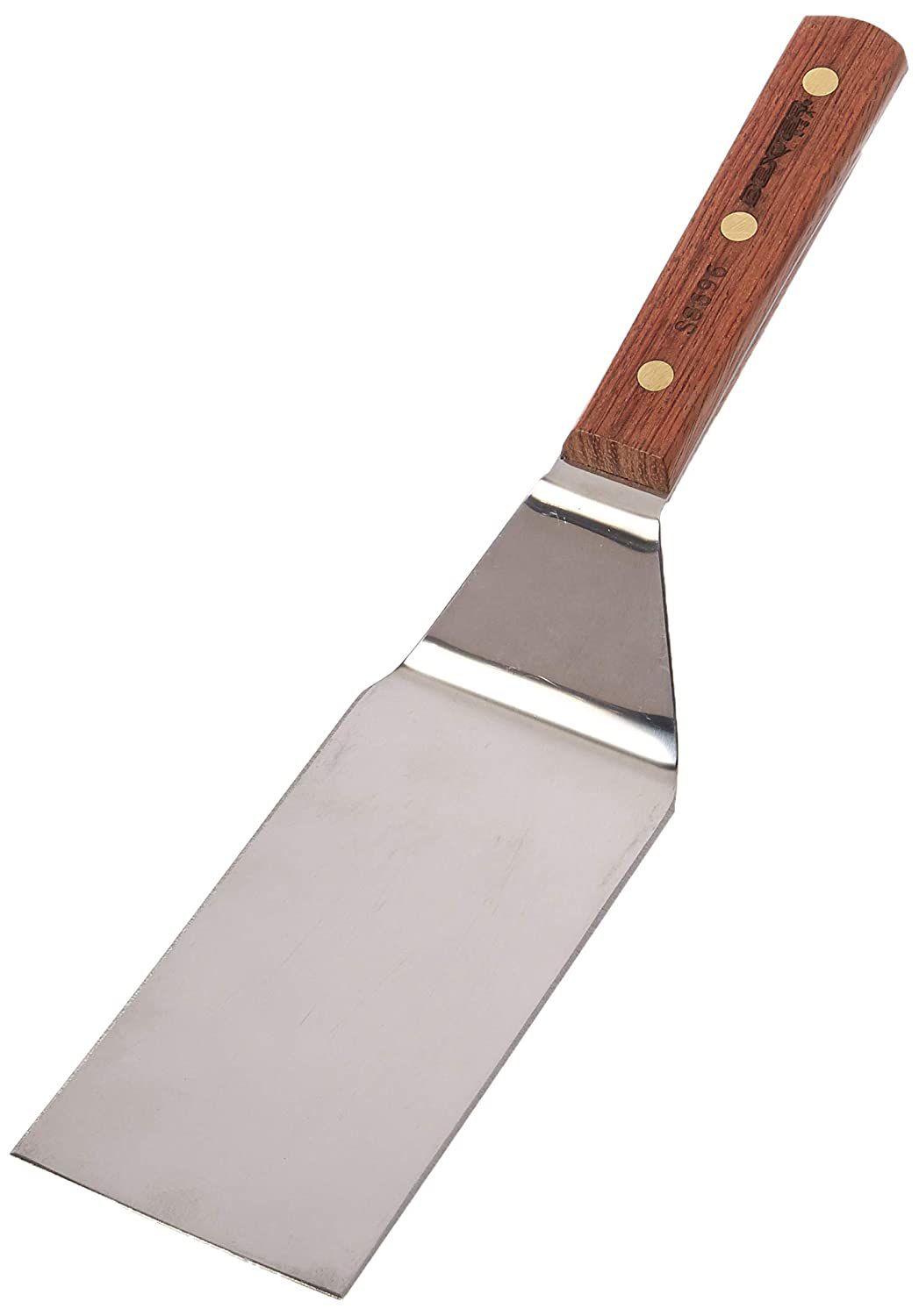 For effortlessly smashing, flipping, and removing burger patties from a cast iron skillet in one clean go, no other model came close. If you’re looking for a longer, heftier turner with more surface area, this is the one.

What Size Turner Was Best?

We included a large range of sizes in our testing, with turners measuring 10.5 to 15 inches long. The turners that performed well in both the pancake and lasagna tests were all shorter than 12.5 inches, with blades narrower than three inches wide. Models with wider blades, such as the Dexter Russell, were excellent at flattening meat patties for smash burgers. However, this feature hindered them when attempting to angle under a single pancake without disturbing the others, and when we tried to use them to pick up a slab of lasagna; the width of the blade was too big to easily maneuver in the pan.

That being said, some of the smaller turners failed to smash burger patties thin enough in one go. And because of their more narrow blades, we couldn’t scrape the wide patties off of the skillet while keeping them in one piece. But, again, their more compact frames also made them a delight to use for other applications like flipping small pancakes and serving delicate pieces of lasagna.

We found that the size of our winner, from MÄNNKITCHEN, was just right at 2 7/8 inches wide and 11.5 inches long; it was nimble yet sturdy and wide but not too much so.

Blade Shape Made a Difference

Blades with a flat front edge and squared-off corners were much better at sliding under pancakes and scraping up burger patties than those with rounded edges. This is probably because when working with a rounded edge, only one point of the edge is touching the skillet at an angle, meaning less of the turner is in contact with the food at once. With a flat edge, you can ensure the turner’s entire front edge is flush with the skillet, and it has a better chance of sliding cleanly under the pancake or scraping up the burger in one piece.

What Angle(s) Made for A Good Offset?

We found models with larger offsets, like the MÄNNKITCHEN (which had a 155-degree offset angle near the handle and a 125-degree offset where the blade flattens out) were the easiest to maneuver. The design made it a cinch to angle under a single pancake without smashing the others. Plus, its highly-angled bends made it super easy to position it flat in a cast iron skillet, helping us smash burger patties without too much effort and without burning our hands on the skillet.

The Criteria: What to Look for in a Good Offset Turner

In some ways, what makes a good offset turner depends on what you want to use it for. Some turners were suited for more delicate work, like flipping pancakes, while others excelled at smashing and scraping burger patties. But here are some design differences we found we preferred no matter what the task was.

We preferred a squared-off blade to a rounded one. This feature made easy work of scraping up super thin burger patties in one go without tearing—and also made it easier to scrape up debris off the skillet for cleanup. Some models had a square shape with slightly rounded corners, which we found was okay as long as there was a totally flat edge at the front of the blade.

For tasks beyond smashing and scraping up burgers, we found a smaller profile was better as larger turners brought a lot of collateral damage to the pancakes they weren’t flipping; they were also way too big to serve a normal-sized piece of lasagna.

We also preferred spatulas with a more severe offset. This made angling to get under a pancake or a slice of lasagna easy. And when making smash burgers, it helped the handle avoid hitting the side of the pan, also making it less likely to burn your hand on the side of the pan.

Our winner, the MÄNNKITCHEN, boasted all of these qualities. It was small enough to flip one pancake without disturbing others in the pan, with an offset severe enough (and handle long enough) that we could flatten the burger patties at the right angle—without much effort and without burning our hand on the side of the pan. Plus, it has the advantage of a flat, squared-off front edge on its blade.

What we liked: This turner held up in all the challenges we put it through. It seamlessly slid under pancakes and flipped them with precision and control. The super angled handle got you low enough to get under food items without straining and without worrying about burning your hand. While the blade doesn't have the surface area of the bigger models, it was still pretty good at totally flattening smash burger patties, requiring only a few extra presses and smears. This model is also the perfect size for serving lasagna; it had no trouble cutting through layers of noodles and sauce, getting under a slice, and lifting it all to the plate in (mostly) one clean piece. It also had a sturdy stainless steel blade, so you don’t have to worry about it bending out of shape. We also liked how, unlike any of the other models, all three edges of the blade are beveled, which made scraping and sliding under food from any direction that much easier.

What we didn't like: We wish the blade was just slightly wider. If it was, it could have scraped up the smash burger even better—although it performed well in that test nonetheless. While its sturdiness is a boon, a bit more flexibility in the blade would have made it easier to “smear” the burger meat into the skillet, as well as make it easier to bend to get the perfect angle under pancakes and lasagna slices. Also, because of  the wood handle, it’s not dishwasher-safe.

What we liked: In the smash burger test, this model pressed the patties flat in one swift motion and scraped them up perfectly. Because of this model’s large surface area, it was easy to transfer food—  you could even pick up two pancakes or burger patties at a time. The blade’s edges are very straight and sharp, so scraping up the smash burgers was a breeze—it left almost nothing behind. This also made scraping up the debris in the pan easy. Plus, the bend between its handle and the blade fit perfectly into a cast iron skillet. This angle design also helped us smash burger patties completely flat and level without much fuss and, more importantly, without burning our hand on the side of the pan.

What we didn't like: Its large size made precisely targeting just one pancake without damaging others difficult—this also hurt its ability to flip pancakes with accuracy. When serving lasagna, it was just too big to maneuver well, failing to smoothly slide under and lift a normal-size slice. Because of the finish on the stainless steel, this turner had a slight stickage problem. For example, once or twice a pancake wouldn’t slide off easily—and a small amount of meat stuck to the bottom when smashing the burgers. Also, it’s not dishwasher-safe thanks to its wood handle.

What’s the difference between an offset turner and a spatula?

Spatulas can take many shapes: there are rubber spatulas that are perfect for making scrambled eggs or folding flour into cookie dough. There are offset spatulas, which, like offset turners, have bends between their handle and blade, making it easier to get the blade flat and level for getting super smooth frosting on a cake. There are fish spatulas, which are slotted, super-thin, and flexible, and also slightly angled at the end of their blade. And then there are the normal, ubiquitous spatulas you know and love that might be slotted, but usually only have one bend. Offset turners, on the other hand, are made specifically for the purpose of turning things (burgers, pancakes, etc.), and their two bends provide a better angle to slide under food items.

Do I really need an offset turner in my kitchen?

In many cases, an offset turner might be good enough to replace a normal spatula (excluding the ones made of silicone for use on nonstick pans). For tasks like flattening and flipping burger patties for smash burgers, there really isn’t a better option (unless you want to invest in a plastering trowel). If you need more convincing, read Associate Commerce Editor Grace Kelly’s love letter to her offset lasagna turner spatula, and why she thinks everyone should have one.

How to Descale and Clean Your Coffee Maker

The evolution of whales from land to sea